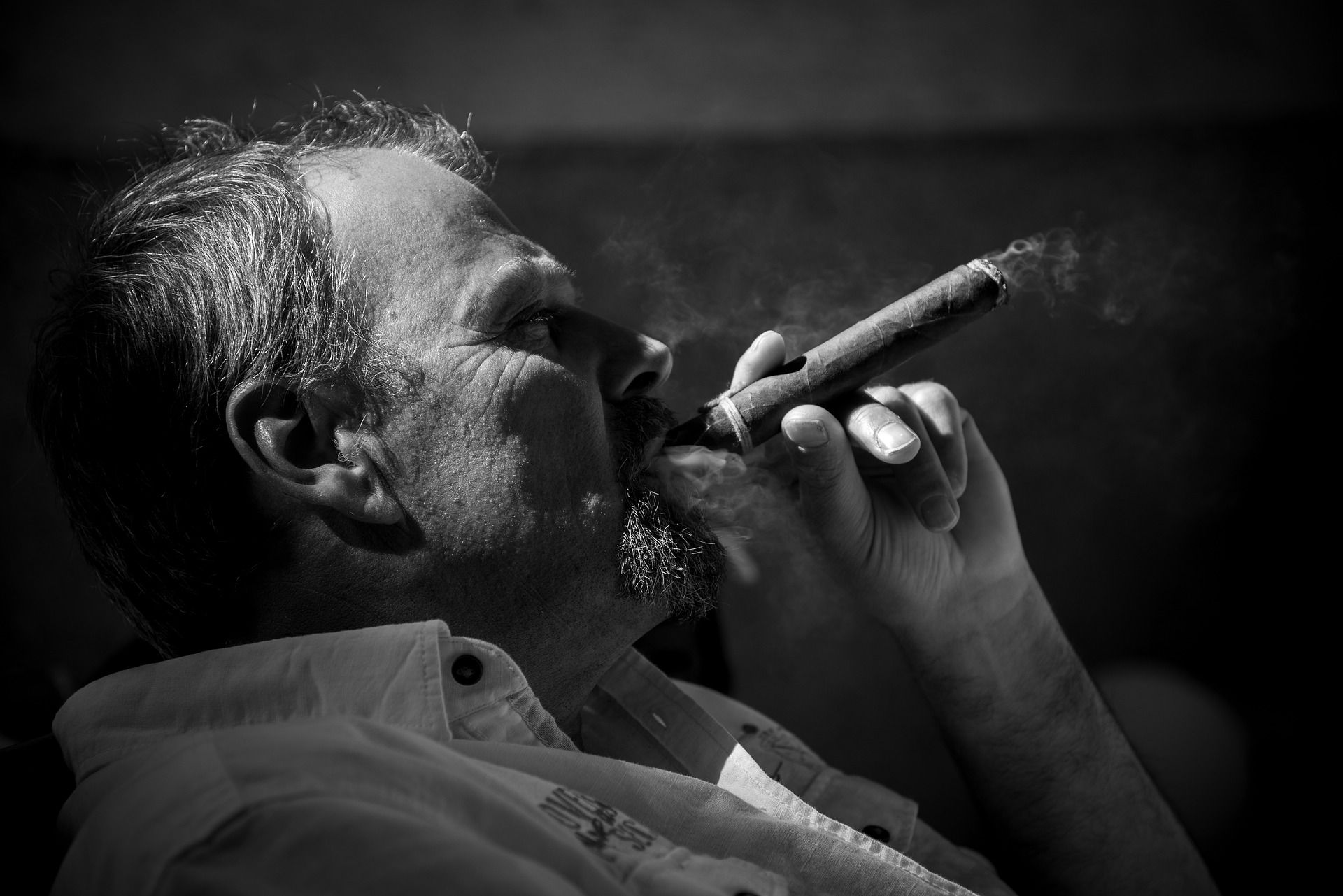 WHAT DOES THIS MEAN?

In our aim to provide as much information as possible about cigars, here is the Cigar Buyer Glossary. If there are any terms you think are missing, please let us know and we will identify them as new additions. Just email us at alex@cigarbuyer.co.uk

Aging - Some believe that fine cigars shouldn't be smoked until two years after they're made. Most well made cigars will continue to improve with age for many years if stored properly. That said, most cigars really shouldn't be stored for more than 15 years as they will by then have lost much of their original aroma.

Binder - The leaf into which the filler is rolled.

Blend - The distinctive mixture of different types of tobacco leaves in a cigar that gives it its unique character, including up to four types of 'filler', the 'binder' and 'wrapper'.

Bloom - A natural part of the ageing process; the result of oils exuding from the tobacco. It usually appears as a fine whitish powder and can be easily brushed off, unlike bluish-coloured mould which stains the 'wrapper' and spoils a good cigar.

Box - The traditional wooden container, with a cedar sheet inside, used to package hand made cigars – not to be confused with a humidor. Cabinet Selection is a wooden box with a sliding top designed to hold 25 or 50 cigars. 8-9-8 is a rounded-sided box designed to house three rows of cigars – eight on the bottom, nine in the middle and eight on the top, usually tied with a ribbon and covered with special acid-free paper. The flat top, sometimes known as the 13-topper, is a flat rectangular box with 12 cigars on the bottom and 13 on the top, divided by a wooden spacer.

Cap - A circular piece of tobacco leaf placed at the head or uncut end of the cigar to secure the wrapper; mostly on Havana cigars. Dominican cigars and those from most other countries are usually secured with a twist of the wrapper which is then gummed onto the uncut end, or tied off as a pigtail, known as the 'flag'.

Colour - The colour of a cigar, which ranges from light green to darkest brown, can affect its taste. Darker wrappers indicate a concentration of sugars in the leaf and such cigars often taste sweeter; not bitter as you'd expect. Conversely, a light coloured wrapper usually offers a drier taste. There are over 65 different shades of Havana cigar wrapper alone. All Havanas in a box are colour matched with the smallest tonal variances, arranged with the darkest cigar to the left and the lightest on the right, and banded by hand at exactly the same height on every cigar.

Condition - Cigars in good condition should feel firm but springy. If they are too moist they will be soft and spongy; too dry and they become brittle and, eventually, rigid and unsmokeable. They're best kept in a proper humidor.

Draw - The amount of air drawn through a lit cigar. A 'hot' draw is one that is too easy and suggests the cigar has been rolled too lightly and will burn unevenly and more furiously. A 'plugged' draw indicates the tobacco has been rolled too tight, making it difficult if not impossible to smoke. The 'perfect' draw speaks for itself.

EMS - English Market Selection are the finest Havana cigars that have traditionally been specially selected for the more discerning British market. Look for EMS on the box.

Figurado - A cigar with an irregular shape pointed at one end or double-figurado, pointed at both ends.

Filler - Two to four leaves that are concertina'd along the length of the bunch - by the cigar roller - which are carefully gathered and evenly spread to ensure the cigar draws properly. This is the heart of a fine cigar; the cigar's strength and size depends on the number and quality of the leaves used.

Foot - The open end of the cigar that you light. With figurado (torpedo-shaped) cigars where both ends are tapered, examine the cigar carefully to find the small aperture which indicates the 'foot'.

Habanos - The denomination of origin reserved for the highest quality cigars made in Cuba, which are usually made from the finest tobacco grown in the Vuelta Abajo or Partidos regions. Also known as Havana cigars.

Hand-rolled - A premium cigar with long filler and a high quality wrapper, made entirely by hand. It's said that every hand-rolled Havana goes through at least 222 different stages before it is ready to smoke.

Head - The closed end of a fine cigar, before you cut and light it at the 'foot'. You should always draw on a cigar through the 'head'.

Hecho en Cuba - Made in Cuba.

Humidification System - An essential element of the cigar humidor that generates an appropriate level of humidity by releasing moisture, without which a humidor would simply be just another box. Hand made cigars must be protected from extreme temperatures and kept in a humidified environment, ideally 16-18o Celsius and 65-70% relative humidity.

Humidor - A specially crafted box (which can be made from wood, glass, plastic, silver or other material) containing a humidification system that protects and nurtures fine cigars, recreating the humidity of the countries in which they were made.

Hygrometer - An invaluable device that measures the humidity level in a humidor and reminds cigar smokers to top up the water supply on a regular basis.

Ignition - Preferably by a long cigar match, after you have struck the match and allowed the sulphur to burn off, otherwise it will impair the flavour of a fine cigar. Gas lighters are also fine, but petrol lighters should be avoided at all times.

Large cigars - The industry definition of cigars whose weight is 2.5 grams to 5 grams in weight.

Larger cigars - The industry definition of cigars whose weight is more than 5 grams in weight, almost all of which are Cuban cigars and most other hand-made cigars.

Machine-made - Refers to cigars that are made entirely by machine, often from short filler (i.e. chopped pieces of tobacco) instead of long filler (unchopped leaves that are as long as the cigar itself).

Miniatures or small cigars - Short, very thin cigars, which sometimes are not much longer than the cigar match used to ignite them. The industry standard is up to 1.2 grams in weight.

Refrigeration - Storing cigars in an airtight bag in a fridge is not recommended for at the very least the cigars will have to be returned to room temperature for at least 30 minutes before smoking. More importantly, the cold will impair the flavour and aroma of a fine cigar. It's best to keep fine cigars away from extremes of cold or heat by storing them in a humidor.

Ring Gauge - The recognised measurement for the diameter of a cigar, based on 64th of an inch. For example, a 48 ring gauge cigar is 48/64ths or two-thirds of an inch thick. The length of a cigar is measured in inches or millimetres.

Shade-grown - High quality wrapper leaves grown under a cheesecloth tarpaulin through which the sun is filtered, creating a thinner, more elastic leaf. The ultimate choice.

Smoking-time - Most thicker robustos and larger ring gauge cigars will last for 45 minutes or longer, depending on how frequently you draw on them; far longer than thinner, shorter cigars.

Stick - Another name for a single fine cigar.

Sun-grown - Wrapper tobacco grown in direct sunlight tends to have thicker veins and is coarser than shade-grown.

Taste - Some smokers prefer to discard the last third of their cigar as they feel the flavour tends to concentrate too much for their palate. Other, stronger palated smokers say this is the part of the cigar they really look forward to.

Torcedor(a) - Cigar roller. The word translates as twister, but this is the last thing a roller should do when making a cigar.

Totalmente a mano - Totally by hand. A description created in Cuba to differentiate between the Cuban method of making cigars by hand and the semi-mechanised techniques used elsewhere that can legally be described as ‘Hecho a mano’ or ‘Hand-Made’.

Unravelling - Cigars that have been allowed to dry out will unravel, as will any cigar whose 'cap' or 'flag' is cut too deep into the main body.

Whiffs - The industry definition of cigars whose weight is between 1.2 grams and 2.5 grams in weight.

Wrapper - Often described as the most important part of the cigar from the point of view of a) appearance and b) taste - it is the wrapper you taste.

You have any suggestions for us to improve our website? Tell us!